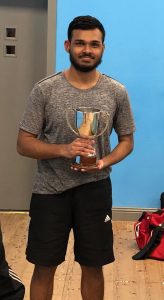 In the Club Championship itself, players were divided into three groups with top seeds Zeesth Naseem, Jason Fleming and the holder Grant Williams coming out on top. While Zeesth and Jason went straight through to the semi finals, Grant had to negotiate a particularly tough quarter final against the doughty Pete Yearworth. That task suddenly became more difficult when Pete won the first set. A very tight second set saw Grant win 12 – 10 and from there onwards he had the edge and won in four sets. Villa teammates Ian Hunter and Ian McLagan fought out the other quarter final.  After sharing two fairly one sided sets Ian Hunter eventually prevailed although he was taken all the way to juice in the fourth set. 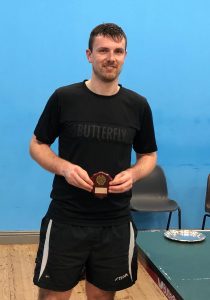 ting somewhat blown away in three straight sets. The other semi looked tighter although hats off to Grant who won in three well contested sets against Jason with the closest and probably the crux being the second which was won 16-14. In the final Grant did all he could against Zeesth with some terrific phases of play particularly in the first two sets. Having won the second set 14 – 12 and with the match level, a combination of Zeesth going into overdrive and perhaps Grant‘s exertions catching up with him saw the match reaching its conclusion fairly quickly. Congratulations to both players – Zeesth on winning his first title and Grant for such a spirited defence.

The Handicap Event was straight knockout with sixteen participants and one of the closest matches in the first round saw young Nairn Nixon defeating Pete Yearworth 31 – 30 in the third and deciding set. In the quarters, Nairn edged out Moira Brown 21 – 20 again in the third and deciding set. In one of the other quarters, Grant faced up to Zeesth again but this time with a small start. This proved not to be enough and Zeesth ed 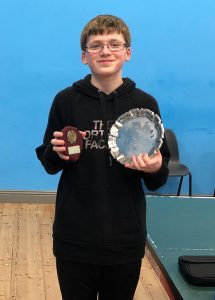 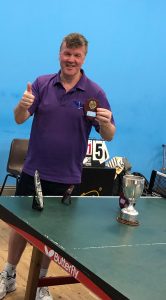 and old fashioned chiselling technique to finally wear down Euan in three sets after being well beaten in the first thus preventing an all Junior final (Spoilsport!). In the other semi, the Nairn Nixon bandwagon continued against Club Champion Zeesth. Having won the first set fairly comfortably Nairn then lost several chances to win the second before Zeesth edged it 31 – 30. Undeterred, Nairn came out fighting in the third set and knocked Zeesth out of his stride and this time he made no mistake when the win was in sight. In the Final Ian never really managed to lay a finger on Nairn and a famous and well deserved victory was assured.

To complete the day there was a Ballot Doubles competition with some promising partnerships coming out of the draw. None more so than the two finalists Euan with Zeesth and Pete Yearworth with Nairn. Euan and Zeesth won the first set 11 – 6 then a second set with fluctuating fortunes and some brilliant play went to Pete and Nairn 17 – 15. The third set was tight too but eventually Zeesth and Euan prevailed in what couldn’t have been a tighter tussle.